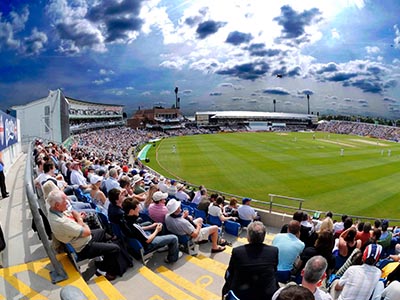 Entertain your important clients and guests at one of the world’s most famous cricketing venues with our Headingley hospitality packages. The Yorkshire-based ground is renowned for producing a fine display cricket with a wonderful atmosphere to match.

The 3rd Ashes Test in 2019 showcased an unforgettable performance from Ben Stokes at Headingley. In 2021, crickets fans were also able to attend the well-played England v India fixture, with England winning by an innings and 76 runs, and England v Pakistan where England again took home a win by achieving 45 runs. This was definitely a hard-fought series for the Three Lions!

Exciting fixtures have been announced for the Emerald Headingley Test Match in 2022, and Eventmasters are offering fantastic hospitality packages to offer you and your important guests. Don’t miss your chance to see Joe Root’s men compete against New Zealand and South Africa at Headingley Stadium.

Yorkshiremen have never been modest about their cricket and to be fair, given the county’s success down the years, they haven’t had much to be modest about.

Go onto the website and it proclaims – “Yorkshire County Cricket Club is one of the greatest clubs in the world”.

It continues: “Established over 150 years ago, the history, tradition and passion of Yorkshire cricket is renowned. No other county in the history of the game has won more trophies and produced more players for England.”

Headingley Cricket Ground has been home since 1890 and a venue for Test Matches since 1899.

There have been some amazing eras.

Winning the title four times in the 1900s, the side, led by Lord Hawke, included great players such as George Hirst, David Denton – who scored 2,000 runs in a season four times – and Wilfred Rhodes, who took a career 3,598 wickets for the County.

The 1920s featured openers Herbert Sutcliffe and Percy Holmes, who still hold the record for the highest opening stand of 555 against Essex. George Macaulay took 100 Championship wickets in a season 10 times.

The 1930s featured Hedley Verity, a great left-arm spinner, Bill Bowes, an international opening bowler, and Len Hutton, one of the greatest batsmen ever to play cricket.

There are two separate grounds – Headingley Carnegie Cricket Stadium and Headingley Carnegie Rugby Stadium with a two-sided stand sharing some facilities. Originally owned by the Leeds Cricket, Football and Athletic Company, it is now managed together by Yorkshire C.C.C. and Leeds Rugby.

With facilities having become somewhat tired, the club and university collaborated in building the Headingley Carnegie Pavilion, which replaced ‘The Shed’ to the northern side of the cricket ground which, dating from the early 1970s, was the oldest surviving structure. It produced quality changing facilities and a new media center.

Further huge improvements are planned with a £50 million re-development over 20 years designed to secure the stadium’s Test Match status.

Phase One, the erection of permanent floodlights, is complete.

Phase Two is the rebuild of the Football Ground End, in conjunction with Leeds Rugby, to incorporate a three-tiered seating area, which will accommodate 5,060 seats, enhanced corporate facilities and new permanent concession units. Phase Three envisages an additional 915 seats to the upper tier of the North East Stand with the possibility of a cantilever roof from the side of the Carnegie Pavilion to the existing scoreboard.

Phase Four would see the development of a new Pavilion located in the North West area of the stadium complex. Built on five levels, it will be adjacent to the existing Carnegie Pavilion, to include state-of-the-art corporate facilities, new dressing rooms for the players and coaching staff, Members’ Long Room and seating and the creation of a main entrance to the stadium on Kirkstall Lane.

A great club looking to the future and dreaming of even greater glory.

Headingley Cricket Ground is one of the UK”s leading cricket venues, found within the Headingley Stadium complex in Leeds.

Known as the home of Yorkshire County Cricket Club, it has become renowned for hosting some of the world”s most exciting England Cricket fixtures including games in the Cricket World Cup and Ashes.

The Headingley cricket fixtures for 2021 are as follows:

Headingley ticket prices can vary a great deal depending on the match of choice. Booking in advance can ensure that guests make a saving ahead of their chosen game.

Headingley tickets are a cost-efficient way of enjoying some of the UK”s finest cricketing spectacles, however, an occasion such as the Cricket World Cup is certainly worth enjoying with an added tier of VIP luxury. With Headingley hospitality, you will not only enjoy a great match day but also an array of splendid corporate benefits including a complimentary bar, fine dining and a champagne reception.