Old Trafford, also known as “The Theatre of Dreams” around the world, has been home to Manchester United since 1910.  Having become an important place in the history of English and international football, Old Trafford now has a capacity of 74,994 and is known to all fans of the game for its prominent role in our sport.

In addition to being the home of Manchester United, Old Trafford has been the venue of the Rugby Super League grand final from 1998 until today, as well as the location for the 2000 and 2013 Rugby League World Cup Finals.

Aside from sporting uses, big names such as Bon Jovi, Genesis and Bruce Springsteen have held concerts on the legendary stadium.

Eventmasters are delighted to offer outstanding hospitality packages at Old Trafford. Click the button below to find out more. 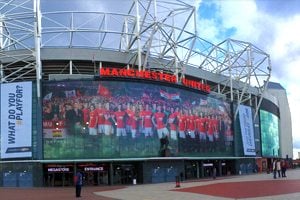 Come and enjoy a once in a lifetime experience at The Old Trafford Stadium with our official Manchester United Hospitality Packages. Watch the 2021/22 Premier League season in style today with Eventmasters.

Experience the Red Devils’ in action at The Old Trafford Stadium and enjoy a spectacular matchday! Your guests and clients will get to experience VIP Manchester United Hospitality Packages, as well as being able to access the full complimentary bar. What more could you ask for?

Also known as the red devils, Manchester United have had the pleasure of several big names gracing their team, including Cristiano Ronaldo, David Beckham and George Best.

Old Trafford Stadium has a capacity of 76,000, making it the second-largest stadium after Wembley.

Old Trafford was conceived by Manchester United chairman John Henry Davies who donated funds to build a ground fit for a First Division and FA Cup-winning team and was designed by architect Archibald Leitch. Its initial capacity was approximately 80,000 standing.

In 1936, an 80-yard-long roof was added to what is now known as Sir Alex Ferguson stand. In 1941, a German air raid destroyed much of the stadium, forcing the club to play their “home” games at Maine Road stadium. Manchester United returned home in 1949.

After being converted to an all-seater stadium in the early ’90s, the capacity of the stadium was reduced to around 44,000 before being increased by various stands throughout the next decade.

Old Trafford’s most recent expansion was finished in May 2006 – in March 2007, over 76,000 people saw Man United beat Blackburn Rovers.

Old Trafford is surrounded by four stands for the fans – these are known as Sir Alex Ferguson (North), Sir Bobby Charlton (South) and the East and West stands.

The Sir Alex Ferguson Stand can hold around 26,000 spectators – the most out of the four stands, in addition to being able to house fans in hospitality suites and executive boxes. As the main stand, it also features most of the facilities, such as the Red Café and the Manchester United museum and trophy room.

The stand gained its current name on the 5th of November 2011, in honour of Alex Ferguson’s 25-year manager position at the club. A statue in his honour can be seen outside the stand.

This Southern stand contains most of the executive suits and is regularly used by VIPs who come to watch matches. The stand gained its current name on the 3rd of April 2016 in honour of legend Bobby Charlton who debuted 60 years ago that day.

Known by every football fan under its colloquial name, “Stretford End”, the stand is home to the noisiest and most impassioned fans. The stand received a second tier of seating in the 2000-01 season. A statue of acclaimed striker Denis Law, known as “King of Stretford End” can be found on the upper concourse.

Old Trafford is the perfect venue for witnessing football at its highest level as well as treating valued guests to a memorable time.

Eventmasters proudly offer VIP tickets for Manchester United fixtures as well as the finest hospitality packages available which through their luxury can ensure a wonderful time alongside your guests. Take a look at the Manchester United fixtures available where you can also book your hospitality package and call today if you would like to know more.