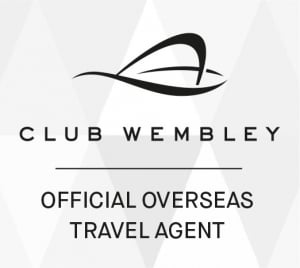 All Club Wembley packages are combined with accommodation and or travel options. Please contact us with your specific requirements.

Eventmasters are delighted to offer a wide range of Wembley Stadium hospitality packages and VIP tickets in combination with accommodation and travel, for some of the UK’s biggest sport events in 2021/22. As a licenced Overseas Travel Agent for Club Wembley, we pride ourselves on offering hospitality packages and tickets for a diverse selection of sporting events.

These will include England’s upcoming international football matches, high-profile Boxing events and a host of exciting NFL London fixtures.

Treat guests to something special this year with a VIP trip to Wembley Stadium.

As an official licenced Overseas Travel Agent for Club Wembley, Eventmasters are thrilled to be providing exclusive Club Wembley Hospitality Packages, in combination with accommodation and / or travel, for some of the greatest sporting and entertainment events taking place at Wembley Stadium in 2021/22.

Sitting on the grounds of the old stadium and opened in 2007, Wembley Stadium is the number one destination for football in England, with its influence spreading far further through British sport and culture more widely. Wembley is known as one of the largest stadiums in the world, providing a once in a lifetime experience for football fans, music fans… or pretty much most sporting activities.

Year after year, the most iconic events are held at Wembley Stadium. From the world’s largest music acts to heated football fixtures, a night at Wembley promises excitement! Paired with the most sumptuous Wembley hospitality packages, there is nothing more a guest could ask for. It is the most perfect venue to visit for any event!

Once the temporary home of Tottenham Hotspur, Wembley Stadium has also hosted rugby for the Saracens and Harlequins, American football, and boxing – perhaps most notably the April 2017 fight between Anthony Joshua and Wladimir Klitschko. Not forgetting to mention what Wembley has to offer this year! The FA Cup final and semi-finals… Wembley Stadium holds an average of 32 events per year!

Anthony Joshua, the British Heavyweight Champion, made his long-awaited return to Wembley Stadium on Saturday 22nd September 2018, when he faced Russian challenger, Alexander Povetkin. This trip to Wembley resulted in a highly anticipated victory for the champion. Thus, Joshua successfully defended his WBA Super, IBF, WBO and IBO Heavyweight World titles in another ground-breaking night at Wembley.

Boxing at Wembley Stadium is not a new phenomenon, the first of significance was Muhammad Ali’s famous clash with Henry Cooper, a fight that saw both men pick themselves up off the canvas, with Ali eventually winning in the 5th round.

The most famous fight at the old Wembley Stadium, however, was surely Franko Bruvo finally winning a world title there in 1995. The people’s champ defeated Oliver McCall to take the belt on a memorable night at the old stadium.

The “New Wembley” may have a brief history, given the fact that it has only been open for a little over a decade. But the Wembley stadium we see today is only the most recent chapter in the story of “Wembley”. Club Wembley members and fans are sure to see an increase in the prime events held at the stadium.

Aside from boxing, the original stadium hosted virtually every significant football match you can think of: the World Cup final, European Championships final, multiple European and UEFA Cup finals, and of course, as the home of English football, it has played host to many England matches. Thus, within Wembley Stadium lies the heart of English football.

1966 saw the old Wembley Stadium as the prime venue for the FIFA World Cup. Nine matches were hosted there including the phenomenal final which saw England take a 4-2 victory against West Germany. Since then, football history has and continues to be made at Wembley.

The new Wembley Stadium first opened in 2007 and the first English goal there was scored by David Bentley, as the English and Italian under 21 sides drew 3-3. Later that year Chelsea defeated Manchester United in the first FA Cup final at the new Wembley Stadium. In the years since, the stadium has hosted two Champions League finals (2011 and 2013), multiple NFL games, hundreds of concerts, and aforementioned boxing matches.

Wembley Stadium also hosted the 2020 European Championships semi-finals and final. There are many new upcoming events that are taking place at Wembley  Stadium, such as the UEFA finals and the EURO 2021 finals! Why not book Club Wembley tickets with Eventmasters and witness football history in the making?

Wembley is also home to the headquarters of the FA. The Wembley Stadium is owned by the FA (which is the football association) and this is the governing body of Association Football in England.

Such an outstanding venue demands outstanding hospitality services, and Wembley Stadium well and truly steps up to the mark. Combining prime location seats with splendid views alongside exquisite dining and VIP service, all within the luxury setting of areas including Club Wembley and the Bobby Moore Club. Indeed, Wembley Stadium is not a venue to be overlooked.

Secure your hospitality packages and tickets today for all the latest Wembley Stadium events with Eventmasters.