Stamford Bridge is the London home of Chelsea Football Club, having housed the club since they were founded in 1905.  The West London ground is instantly recognisable among fans of the beautiful game.  The stadium can reach capacities of over 41,000 for football matches, though it’s also seen many other sports played on its turf.

Stamford Bridge has also been a host of international games, too, with England having played at the stadium three times.  It’s also held three FA Cup finals, ten FA Cup semi-finals and ten Community Shield match in its time.

Eventmasters are delighted to offer first-class hospitality at Stamford Bridge. To discover the options available for the 2021/2022 season, please click the hospitality button below. 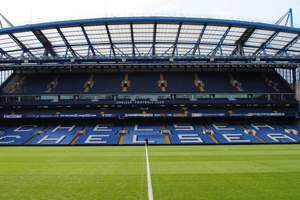 Experience the outstanding matchday at Stamford Bridge with our official Chelsea Hospitality packages ready for the 2021/22 Premier League season. Witness astonishing views of the pitch from your seating areas (luxury padded seats in the West Stand), including three-course fine dining accompanied by a complimentary bar, which is provided for your entertainment!

Chelsea has cemented themselves as a major side in English football.  Competing in the top flight since 1989 and finishing in the top ten every year since 1995, Chelsea has a great deal to celebrate.

Visiting Stamford Bridge is a thrilling day out for any Blues fan.  To make the day all the more luxurious, why not entertain guests with our fantastic Chelsea VIP hospitality packages.

Follow the latest Chelsea news and blogs here with Eventmasters.

Stamford Bridge stadium first opened on the site it still sits on in 1877.  The ground was first used for athletics meets, but by 1904 was being used as a venue for professional football.  The owners tried to sell the ground to nearby Fulham, but they turned down the offer and so the owners decided to found Chelsea FC to occupy the ground – and years later the West London teams are still bitter rivals.

Stamford Bridge’s current iteration was finished in 1998, with the ground being one of the most recognisable in the English Football League.

The original stadium at Stamford Bridge was made up of large banks, which were built using the excess earth which was removed from Piccadilly Lane. The away fans would sit next to the tunnel and the dug-outs in the East Stand but be moved further out up to the Shed end away from the players.

Stamford Bridge stadium has four stands which in total, have a capacity of 60,000 seats. The stadium consists of four stands which include The Matthew Harding Stand (North), East Stand, The Shed End (South) and The West End. Each of these stands has two tiers of seating and were all constructed within different/ separate extension plans.

Previously known as the North Stand, The Matthew Harding Stand is located along the north side of the football pitch. The stand is now named after the former Chelsea player ‘Matthew Harding’. The stand has two tiers and holds most of the season ticket holders which therefore gives the ground a welcoming and outstanding atmosphere.

The East Stand is the only section of the stadium which is covered by a roof and is seen to be relatively modern. Known to be the heart of the stadium, as it hosts most of the popular locations in the stadium, such as the dressing rooms, conference rooms and the press centre.

The Shed End Stand is located on the north side of the stadium. This stand was originally known as the Fulham Road End, but Chelsea supporters named it The Shed instead, eventually resulting in the club changing the name too. This stand is mainly where the loud fans congregate and celebrate their victories. In The Shed End stand, the view is known to be the best compared to the other three stands (another reason as to why the stand is so popular).

Stamford Bridge is most well known as the home of Chelsea FC, but the stadium also has a number of other facilities.  On-site there are two four-star hotels, a music venue and a Chelsea FC museum.

From the early days of the stadium until 1968, greyhound racing was a hugely popular event at Stamford Bridge.  Back in the 1930s, the sport was much more popular than football, with prize funds far superseding those in the beautiful game.  Rugby union and rugby league games have also been held at the ground in its time, as well as motorsport, American football.  Cricket and baseball matches have both been held once each at the London stadium.

Despite all this, the ground has always been and will be known primarily for football.  Being a West London cathedral to the sport, the ground has hosted far more than just games for Chelsea.  The ground was the host for the FA Cup finals from 1920 until 1922, as well as being host to England on three occasions.

Come and watch Chelsea FC in action! Winners of the latest UEFA Champions League. Chelsea overcame the odds and beat Manchester City and succeeded in winning the Champions League. The team are also the very first which had won all three of Europe’s major club competitions!

Stamford Bridge is an incredible venue for witnessing high-class sporting prestige and entertaining valued guests.  The ground boasts stunning corporate hospitality facilities in the Hollins Suite, which is ideal for socialising and meeting with important clients in a luxurious environment.

Eventmasters proudly offer VIP Chelsea tickets and the finest Stamford Bridge hospitality packages available. Our luxurious packages ensure you and your guests have an incredible VIP experience.  Secure yours today for Chelsea FC matches at Stamford Bridge with Eventmasters.  For the latest news and updates, see our Chelsea news updates above.

We also have alternative hospitality packages on offer, so check out our football hospitality options and book today. Don’t miss all of the action for this year’s Premier League season.