Eventmasters are delighted to offer key events throughout the 2021/2022 season at Tottenham Hotspur Stadium. With a capacity of 62,062 and a single-tier 17,500-strong home south stand, the stadium is without a doubt one of the finest in the United Kingdom.

Spurs fans can look forward to a match day experience like no other in a state of the art facilities that provide the perfect backdrop for exhilarating matches. Two of the NFL London 2019 games were hosted at the stadium in October as American Football continues to grow in popularity.

Eventmasters are delighted to offer fantastic hospitality packages at the impressive new Spurs Stadium. For further information on the options available, please click the hospitality button below. 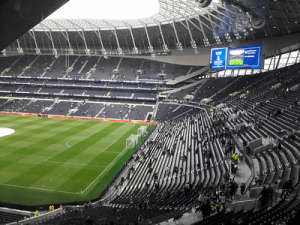 Enjoy the 2021/22 Premier League season at the Tottenham Hotspurs Stadium, with our official Tottenham Hospitality Packages. Outstanding tournament tickets are available… with fine dining included! You can enjoy the day with either Spurs Travel Club Package, or Tickets and Travel package.

Take full advantage of our Tottenham Hospitality Packages and treat yourself to complimentary drinks, which will allow you to enjoy the Premier League season with a VIP setting.

Tottenham Hotspurs were founded in 1882 and were first promoted into First Division football in 1909. After a successful run, Spurs made a name for themselves in 1963, by becoming the first British club to win a major European competition when they became champions of the European Cup-Winners’ Cup.

Spurs continue to wow fans with their hunger, drive and pursuit of silverware for the trophy cabinet. Last year they were inches away from becoming European Champions and will no doubt be after the title in 2020. They have won 2 League Championships, 4 League Cups and 8 FA Cups. Some of the household names that have had their hands in cultivating successful players and results are club legend Mr Tottenham (Bill Nicholson), Harry Redknapp, Andre Villas-Boas, Mauricio Pochettino and most recently, Jose Mourinho.

Spectating at Tottenham Hotspur Stadium is set to be a thrilling day out in the new state-of-the-art stadium. To make the day all the more luxurious, why not entertain guests with our fantastic Tottenham Hotspur VIP hospitality packages.

Follow the latest Spurs news and updates here with Eventmasters.

Tottenham Hotspur called Wembley Stadium their home for the 2018/19 season and no doubt are relieved to have a permanent home again. At the end of the 2016-17 Spurs said goodbye to their former home White Hart Lane 118 years on since its opening. The stadium, which went on to be one of the most famous venues in the world, was unfortunately demolished to make space for the new stadium. The last match at White Hart Lane was one that will be treasured by Spurs fans for a long time. Spurs wanted to leave a lasting memory and beat Manchester United 2-1 in the Premier League.

The team itself was originally founded in 1882 and they have had a pretty impressive run over the years. They quickly made names for themselves and secured a place in history as the first club in the 20th century to achieve both the League and FA Cup double. Another standout achievement marks them as one of the only teams in British Football to have collected at least one major trophy within the six decades that ran from the 1950s to the 2000s. It is these types of victories that have ensured they are one of London’s most successful teams. In more recent times they have finished third in the last three Premier League seasons under the guidance of Mauricio Pochettino.  Jose Mourinho has since been appointed as manager – can the Lilywhites go further under his guidance?

The Tottenham Hotspurs stadium has a capacity of 62,850 seats and is known as the UK’s third-largest football stadium. The Stadium also has a roof that covers the spectators in any event of bad weather. Although the stadium is designed as a modern ‘bowl’, it still has four significant stands. These stands consist of the South End, which is considered as ‘Home End’, The North Stand and The East and West stands.

The South End has a single-tier seating arrangement, which is known as the largest single stand in the UK. The stand is known to be the heartbeat of the stadium due to the outstanding atmosphere the supporters create there on match day.

The North Stand consists of three tiers which all have different pathways. These pathways section off to the East and West Stands (1,2,4 and 5). The East and West stands have two tiers and are mainly intended for premium seating.

In addition to this, in The North East corner, this is where the away fans are located. There is also a family enclosure in The North West corner.

Other Events At Tottenham Hotspur Stadium

Football is not the only event that can be enjoyed within this brand new development. American football fans can look forward to two NFL London Games in October at the stadium. Alongside Wembley Stadium, the venue will look to host an American Football experience worth savouring.

The stadium will also be offering unique visitor attractions including tours, Skywalks and Museum and Archive access. All of which will no doubt impress the budding Spurs fans amongst you.

Enjoy one of the most popular summertime music events in the UK with official Capital FM Summertime Ball hospitality packages & VIP tickets at the new Tottenham Hotspur Stadium in 2021. Upcoming events which are taking place at the stadium consist of Lady Gaga and The Guns n Roses.

Having opened in April 2019, the state of the art facilities at Tottenham Hotspur Stadium provides visitors with an experience like no other. Visitors are transported to a place full of exciting new technology and brand new facilities. The new features will certainly impress you and your valued clients. Standout elements include the new “In Bowl” experience, which allows the fans to feel closer to all the excitement than ever before. The development includes state of the art technology which provides, pre, post and half-time entertainment and guarantees to help keep the Club’s infamous electric matchday atmosphere.

If that wasn’t enough to entice you and your guests to visit then we are certain the new concourse will definitely impress. With more than 60 food and drink outlets, you certainly will be spoilt for choice. The vast concourse allows you to connect with other Spurs fans from different stands or feel at ease with your family in the dedicated family area. The stadium really has thought about each and every one of its fans, ensuring all visitors can enjoy a fantastic matchday experience.

Spurs fans can enjoy the wide array of experiences and pop up shops on offer.  The Tottenham Experience, the biggest club store in Europe will have fans shopping till they drop with exclusive merchandise, gifts and memorabilia.

We are now selling VIP Football tickets and hospitality packages for upcoming fixtures at the stadium. Guests can enjoy a unique experience in exclusive facilities as they enjoy a matchday experience like no other. Treat your valued guests to a VIP football experience. We can’t wait for the stadium to open and we look forward to welcoming you and your clients there.

View our guide to the Spurs travel club package here.