Ascot Racecourse is a leading horse racing venue located in Ascot, Berkshire. Conveniently situated in gorgeous wooded countryside near the Royal beauty that is Windsor Great Park. This prestigious course retains a major name in the sporting world due to its close ties with the Royal Family. The beautiful racecourse features well-groomed lawns and terraces, balconies with superb views, tasteful tea rooms and fine dining restaurants.

The prized horse racing location boasts a large thirteen of Britain’s thirty six annual Group One horse races – the highest level of thoroughbred and standard-bred flat races. The racecourse currently stages twenty six days of racing throughout the year, including eighteen flat meetings held between the months of May and October. Additionally, it also hosts significant jump racing fixtures during the jump season.

As an Official Hospitality Supplier (OHS) directly appointed by Ascot Racecourse we are delighted to provide exclusive Ascot Corporate Hospitality Packages and tickets for numerous race days in 2021 and 2022.

Including Royal Ascot, which is without a doubt the highlight of the calendar. The highly prized event is even often regarded as the ‘jewel on the crown’ of Ascot Racecourse. Alone, Royal Ascot holds an astounding eight Group One races spread across its five spectacular days of unparalleled action. 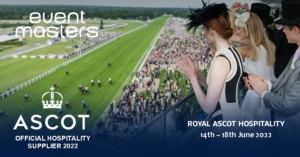 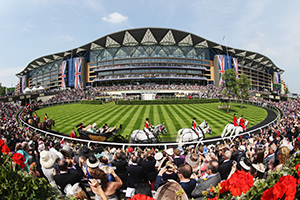 Ascot Racecourse is undoubtedly one of the finest racecourses in the World. No matter the meeting, you can expect style and flair both on and off the course, and hospitality of the highest quality. We have a range of facilities available, particularly during Royal Ascot, including fantastic course facing options as well restaurants and private boxes. Treat your important guests and clients to the experience of a lifetime; they won’t be disappointed.

As well as QIPCO British Champion’s Day. Another phenomenal landmark race day held at Ascot Racecourse every year. This winter race day is often thought of as the grand finale of the flat racing season in Britain and thus attracts some of the world’s finest horses.

The History of Ascot Racecourse

The history of Ascot Racecourse beings in the early 18th century. In 1711, Queen Anne first saw the potential for a great racecourse whilst riding near Windsor Castle. According to historians, as she rode her horse from Windsor Castle to Ascot, she remarked: ‘This would be a fine place for a race… ideal for horses to gallop at full stretch.’ At its inception in 1711, seven horses competed in a race called “Her Majesty’s Plate” on the 11th August for a grand total prize sum of seven guineas.

To preserve the racecourse, in 1813 Parliament passed an Act to ensure that the grounds would remain a public racecourse. Thus, the Ascot Authority is the authority that manages the racecourse until this day.

In 2004, Ascot Racecourse underwent a £185 million redevelopment plan funded by Allied Irish Bank and designed by Populous and Buro Happold. In 2006, the racecourse was reopened again by Queen Elizabeth, current owner of the Ascot estate.

Whilst there is not a strict dress code for all race days at Ascot Racecourse, racegoers are strongly encouraged to dress as though attending a fine, formal occasion. Ladies usually dress in smart occasion attire and opt for hats whilst gentlemen sport jackets with a collared shirt and tie.

For Royal Ascot, a firm dress code applies and varies dependant on the enclosure guests attend. The event is synonymous with style, elegance and unrivalled sophistication, and so guests are expected to uphold these values through their clothing choices.

Details on the full Royal Ascot Dress Code Guide can be found in our blog post.

In addition to horse racing, Ascot Racecourse is also home to numerous other events such as the Luna Cinema, a Beer Festival and a spectacular fireworks display in November.

Furthermore, Ascot Racecourse holds the Royal Ascot Cricket Club, which was founded in 1883. The club’s ground is situated in the middle of the racecourse.

Ascot United F.C., founded in 1965, is likewise based in the racecourse and is located towards the eastern side of the site. The club plays their home games there with a capacity of 1,150.

Ascot Racecourse and the Community

Ascot Racecourse proudly supports over 250 local charities, community groups and businesses by making monetary contributions or by supplying complimentary tickets for use as raffle and auction prizes.

The racecourse launched the Colts & Fillies Club in 2002 in order to make horse racing more accessible and popular with younger audiences. Currently, the club has over 18,500 members and is free to join.

Events including bulb painting are run to involve local schools in various activities. The charity Racing To School is one which supports young people’s learning and development with the aim of encouraging an interest in horse racing. The racecourse also works closely with the National Citizen Service and supports Active Communities Network.

View our guide on travelling to Ascot Racecourse here.

Book your VIP tickets and packages for Royal Ascot & QIPCO Champion’s Day here and experience the races in true style.