Located at the site of the old Lansdowne Road ground, the Aviva Stadium is the current home of Irish Rugby and the GAA.  Exhibiting major sporting events, both national and international, the Dubin ground has quickly found its way into fans hearts since its opening in 2010.

The ground hosts all of Ireland’s international rugby games, as well as the finals of other competitions.

Aviva Stadium has some fantastic hospitality facilities.  These include private corporate boxes and luxury gourmet restaurants.  Think complimentary bars, VIP tickets as well as past and present players making guest appearances.  These are facilities not to miss out on, secure your VIP places at the Aviva Stadium now! 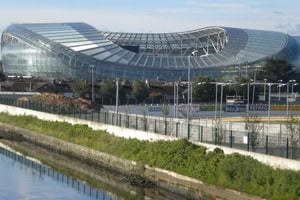 Six Nations is the ultimate international men’s rugby competition. This annual tournament occurs between England, Wales, Scotland, Ireland, France and Italy and is one of Europe’s most anticipated competitions. Expect nothing less than a show of pure strength, power and endurance as teams battle on Irish grounds for the Six Nations Championship. Eventmasters offer the highest quality Aviva Stadium hospitality packages to upgrade your Six Nations experience.

With over 146 years of Irish Sporting History, the Aviva Stadium is one of the most iconic grounds in Europe. From the dip on its northern side to the dark green seats, it’s unmistakably distinctive.

After Ireland cancelled hosting the Euros 2020 due to the COVID-19 outbreak, Ireland will be welcoming spectators back to Aviva Stadium for the rugby internationals against Japan and the USA on the 3rd and 10th of July. Fans worldwide are incredibly excited about this re-opening as it will be the first time Ireland rugby fans can attend an event at Aviva Stadium since February 2020.

The Stadium can hold an impressive 51,700 fans for most sporting arrangements and up to 65,000 for concerts. But, it doesn’t just stop there; the Stadium also provides up to 1,300 VIP seats and 11,000 corporate seats.

Being home to most of Ireland’s international games in association football and rugby, the ground is always packed with a fantastic atmosphere.

Stay up to date with the latest updates with Eventmasters.

First open in 2010, Aviva Stadium is home to both Ireland’s football and rugby teams.

Before Aviva Stadium was built, Ireland’s home grounds were Lansdowne Road Stadium. Established from 1872 to 2007, Lansdowne Road Stadium hosted major Ireland sporting events and became known as the worlds first international sporting venue. After decades of sporting events and historic milestones, the stadium was then demolished in 2007 and replaced shortly with Aviva Stadium.

The official opening of Aviva Stadium was held on May 14th 2012. The World-famous stadium cost approximately €410 million to build and includes many unique features such as its curvilinear shaped stands, transparent roof and facade made of glass. The stadium’s traditional shape was necessary as construction any higher would block natural sunlight from residents and homes. Populous and Scott Tallon Walker designed this architectural masterpiece.

Major Events at the Aviva Stadium

2011 Europa League Final – Porto and Braga battled in the Aviva Stadium in this game, with Porto winning a 1–0 victory.

UEFA Euro 2020 – UEFA announced that the Aviva Stadium will play host to four Euro 2020 finals games however this was then cancelled due to the COVID-19 outbreak. The uncertainty around travel and spectator rules & regulations also led to this unfortunate cancellation.

Other Sports at the Aviva

The Aviva Stadium has hosted a number of other sports, too, not just rugby and football.  It has twice hosted American Football games, once in 2012, and again in 2016.  It is set to return in 2022, with a further five games to be played between college teams.

Book your Aviva Stadium Hospitality now and see exciting matches such as the Six Nations!