Eventmasters are delighted to offer a wide range of Corporate Hospitality Packages & VIP tickets at Etihad Stadium for major sporting events in 2021/2022.

Etihad Stadium is the tenth-largest football stadium in the UK with a capacity of 55,097.

Initially named the City of Manchester Stadium, the venue was originally built to host the 2002 Commonwealth Games. During summer 2003, Manchester City moved from Main Road to Etihad Stadium.

Fans can look forward to a matchday experience like no other with VIP and hospitality tickets for the Premier League, UEFA Super Cup and other exciting events with Eventmasters at Etihad Stadium.

Eventmasters are delighted to offer first class hospitality at the Etihad Stadium. Click the hospitality button below for further information. 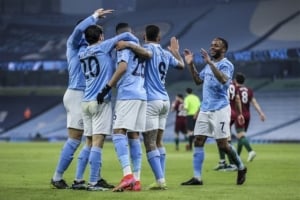 Come and enjoy the 2021/22 Premier League fixtures at the Etihad Stadium during this summers football season with our luxurious Manchester City Hospitality Packages. From VIP seating to panoramic views of the stadium, what more could you ask for?

Your important guests and clients will be treated to a VIP Manchester City Hospitality experience, combined with outstanding seats to watch the Sky Blues’ in action. Because of course… You as privileged guests deserve the treatment, whether that be a drink in the Commonwealth Bar or a VIP seat in The Tunnel Club, you deserve it.

In 2018 Manchester City were estimated to be the fifth most valuable football club in the world (with rivals Manchester United being number 1!) They have steadily remained in the Premier League since 2002 and have proven themselves to be a formidable opponent.

Keep up to date with all things Manchester City and details about the Etihad Stadium right here.

History of the Stadium

Plans for the stadium first began in 1989, with a view to hosting the 1996 summer Olympics. Due to issues with funding, the foundation stone was not laid until 1999 and laid by none other than Tony Blair.

After the Commonwealth Games in 2002, work was undertaken to convert the venue from an athletics ground to a football stadium with Man City able to move in during summer 2003. Further developments took place over the years in order to expand the stadium.

The first game was played in August 2003 against Barcelona where Man City claimed a 2-1 victory.

The Etihad stadium consists of four different stands, these consist of The Family Stand (North), The East Stand, The South Stand and the Colin Bell Stand (South). Similar to the Emirates stadium, the Etihad stadium has a modern ‘bowl’ shape design. This, therefore, means that each stand has two tiers and is connected the whole way round. there is also one additional tier along two sides of the stadium which allowed guests to take a look at the outstanding views.

In addition to sport, Etihad Stadium has hosted many concerts. Acts include everyone from Red Hot Chilli Peppers to Taylor Swift! Upcoming events for 2021 include Soccer Aid in September! – The worlds biggest celebrity charity football match, see Olly Murs and Usain Bolt play against your favourite celebrities and football legends.

Upcoming events at the Etihad Stadium are never-ending! From summer shred boot camps, an NHS 10k walk/race, The Tough Mudder racecourse, an evening with Micheal Mcintyre and many upcoming Premier League fixtures!

Don’t miss any of the action which takes place at the Etihad Stadium, enjoy the 2021/22 Premier League season in style today with Eventmasters hospitality packages.