Home to Liverpool F.C. – The Reds

Anfield first opened in 1884 and has been home to Liverpool F.C. since 1892. Liverpool’s first game at Anfield resulted in a 7-1 win over Rotherham and since then “The Reds” have seen many more victories at Anfield their home stadium.

Anfield stadium has a capacity of 54,074 seats and will be the first football stadium in the UK to fit a permavoid system, which will speed up drainage and irrigation systems to ensure players can perform to their best ability during games. Liverpool is to soon introduce 7,800 more seats which will have safety rails to reduce the danger at Anfield Stadium with persistent standing throughout the games.

Fans can look forward to an Anfield matchday experience like no other with Anfield hospitality tickets for the Premier League, UEFA Super Cup and other exciting events with Eventmasters at Anfield Stadium.

For all the latest news and updates from Anfield Stadium be sure to follow our news page.

Enjoy first-class hospitality at Anfield Stadium with the Liverpool hospitality packages we have to offer. Click the ‘Buy Now’ button below to discover the options available. 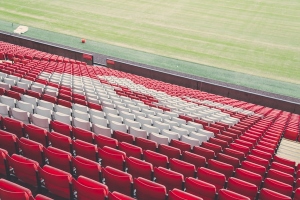 Experience the Premier League 2021/22 season with Eventmasters’ today. Liverpool Hospitality packages which are offered at The Anfield Stadium, guarantee our guests the matchday of a lifetime.

See one of the biggest games in the Premier League 2021/22 season with our Liverpool Hospitality Packages. An exceptional four-course matchday menu and a chance to hear stories from well known Liverpool legends. You can enjoy the day with a choice of three of our hospitality packages: The Premier Club Package or The Main Stand Package.

Liverpool has cemented themselves as a major force in both English and European football.  They have competed consecutively in the top flight since 1964 and have finished in the top ten every year since then – The Reds have a great deal to celebrate.

They have won 19 league championships, 8 League Cups and 6 European Cups – the latter two being more than any other British team! Some of the household names that have lead Liverpool to victory are Liam Millar, Ben Davies, and Curtis Jones.

Spectating at Anfield is a thrilling day out for any Reds fan. To make the day all the more luxurious, why not entertain guests with our fantastic Anfield hospitality packages.

Follow the latest Liverpool news and updates here with Eventmasters.

Anfield is now considered the fifth-biggest football stadium in the UK. It first opened in 1884 and has been home to Liverpool F.C. since 1892. Before then, Everton had used the stadium until 1891 due to a dispute over rent prices.

Since then Anfield stadium has undergone numerous renovations, including its famed Kop stand, which was expanded in 1928 and capable of holding 30,000 people all standing! In the 1990s and after the infamous Hillsborough Disaster it was decided that Anfield would become all-seating.

Anfield is now composed of four stands: The Kop, Centenary Stand, Anfield Road End and Main Stand. Anfield has hosted Premier League, UEFA Cup and Champions League games but is more renowned for its passionate and inventive supporters that create its unique atmosphere.

Liverpool FC was not always known as ‘The Reds’. The Clubs original colours were white and blue… when in fact it was actually Everton who wore red. Did you also know that Anfield Stadium was first rented to Everton FC? Back in 1891, Everton moved to Goodison Park due to rent-related disputes…

Liverpool FC has achieved many firsts in football history. On the 22nd August 1964, Liverpool and Arsenals match highlights were shown for the first time ever on BBCs Match of the day! In addition to this, Liverpool’s game against West Ham United was the first game that was ever transmitted into colour on Match of the day all the way back in November 1969.

The Anfield Stadium is one of the most famous football stadiums in the world.

The Kop Stand is located behind one of the goalposts inside Anfield. The Reds adopted the name ‘ The Kop Stand’, many years ago when a battle broke out in Africa on a steep hill. As a result of the battle, hundreds of soldiers were left for dead. Most of the soldiers which were killed had traits of Lancashire in their bloodline, with a strong contingent with Liverpool.

The newest remoulded stand in the stadium is known as the Main Stand. The Stand was refurbished in September 2016 and now has a capacity of 20,676 in one stand! The structure of the stand consists of three tiers which also includes 105 disabled seats.

The Sir Kenny Danglish stand is named after a legendary football manager and player. The stand was well known as the Kemlyn Stand when not long after been changed to its current title. When in the stand you are able to see two tiers that are able to fit 12,000 supporters in. In addition to this, the stand also has executive boxes and banquet lounges available too.

The Anfield Road End Stand is opposite the Kop Stand and was last refurbished in the 1990s. This stand only has two tiers, with the second tier being relatively small, it has held the position as being the seating area for the away supporters of the ground.

In 2019, Anfield Stadium was granted permission to hosts concerts as well as football events. Some of the 2019 headliners have been Bon Jovi and P!nk… and if that’s not enough, in June 2022 English singer-songwriter Sir Elton John will be performing there live!

In May of 2019, Anfield hosted Rugby’s Magic Weekend, which was a standout weekend that saw Warrington defeat Wigan for a third time this season. There were also wins for the Catalan Dragons and Huddersfield, who celebrated a phenomenal 55-2 win against Hull.

Anfield also offers stadium tours on and off match days, a Legends Q&A and The Anfield Experience. After an expansion in may to 54,167 seats, it has therefore given Anfield greater opportunities for upcoming events in the future.

With upcoming Premier League fixtures, you really don’t want to miss out on any of the action which is on offer!

Such an outstanding venue demands outstanding hospitality services, and Anfield Stadium does more than tick that box. Combining prime location seats with splendid views alongside exquisite dining and VIP service, Anfield Stadium is not a venue to be overlooked.

Secure your hospitality packages and tickets today for all the latest Anfield Stadium events with Eventmasters.

Our Liverpool hospitality specialists are on hand to help you. If you need assistance please complete the form below and we'll come back to you as soon as possible
Scroll to top