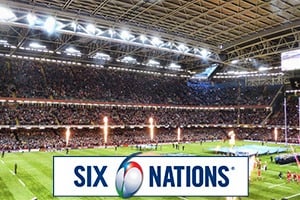 When watching some of the biggest rugby teams in the Southern Hemisphere compete for the 2023 Guinness Six Nations title, why not enhance your matchday and wow your clients with a corporate entertainment facility?

Witness some of rugby’s most prominent international fixtures with official Guinness 6 Nations hospitality packages in 2023 at BT Murrayfield, Aviva Stadium, Principality, Stadio Olimpico and Twickenham. Combine an authentic rugby matchday with fine dining experiences and exclusive seats showing excellent rugby action views at some of the best stadiums in Europe.

The rivalry between England and domestic sides, France, Scotland and Italy promises fans on either side a thrilling encounter. England will definitely be looking forward to when Scotland, the current Calcutta Cup holders, visit Twickenham during the Guinness Six Nations. Can England take home the victory in 2023 on the hallowed Twickenham turf?

Experience the electrifying atmosphere of England rugby at the world’s finest test match arena alongside a VIP Guinness Six Nations rugby hospitality package. There really isn’t anywhere in the world like Twickenham. From the national anthem to the roar of the crowd and the sound of Swing Low echoing around the packed stands – the Twickenham experience is a truly special one for all England fans.

Ireland has been instrumental in some brilliant rugby union internationals, known for having the ability to raise their game, particularly against England – the ultimate clash expected for the Six Nations series in 2023!

In 2023, the Guinness Six Nations Series welcomes England to the Aviva, and Eventmasters are delighted to offer guests and supporters a day to remember with cutting-edge hospitality.

For Ireland rugby fixtures, guests can enjoy the luxurious Clayton hotel, which offers the finest in Aviva Stadium hospitality service – not forgetting the Concert Hall where pre-match lunch, post-match hot buffet and complimentary drinks are provided.

The Aviva Stadium is also a fantastic venue for entertaining, with a capacity of 51,700, it turns into a fantastic amphitheatre for matches – no matter the result.

In December 1870, Scotland challenged the English to a match under Rugby rules… and they have been challenging all-comers ever since.
The contest took place at Academical Cricket Club’s ground at Raeburn Place, Edinburgh, on Monday, March 27 the following year, in front of around 4,000 spectators.

Scotland won, and it set in train a rivalry which lasts to this day, both sides playing annually for the Calcutta Cup. It was donated to the Rugby Football Union in 1878 by the short-lived Calcutta Rugby Club members.

At Murrayfield, Scottish rugby has always been known for its passion and commitment. The fans’ hospitality is known worldwide. But, primarily a footballing nation, there have always been limited numbers to pick from though Edinburgh and the Borders have always been strong.

Scottish rugby has produced some fantastic players down the years.
And may many more follow in their footsteps. Six Nation ticket holders at Murrayfield can expect Scotland to come back stronger and more committed to winning to lift the Calcutta Cup at BT Murrayfield in 2023! Make it a trip to remember at BT Murrayfield.

It is all about pride in traditions. As the crowds pour through the turnstiles, taking full advantage of the great hospitality and camaraderie on offer, there is a fantastic sense of anticipation.

Nerves are jangling. Everyone is on tenterhooks. All the better because the stadium is at the heart of the city – everything is pretty much within walking distance. It breeds a wonderful atmosphere.

Wales has faced tough tests at home against rivals England, but after two consecutive title victories in 2019 and 2020, Wayne Pivac’s side will be vowing to defend their title in the 2023 Six Nations.

Wales and England have competed head-to-head in 131 test matches, originally meeting in 1881 with the latter claiming 65 wins compared to Wales’ 60. It is a different story, however, when viewing their record with champions Ireland. Wales currently boasts 70 victories over their Irish counterparts who have 55.

Wales biggest ever Guinness Six Nations win was against Italy in 2016, where they defeated their European rivals 67-14. Last year was no different as Wayne Pivac’s men dominated once more, defeating Parisse’s men 26-15 to add another win to the scoreboard.

With our first-class hospitality options on offer, we will ensure that your important clients and guests have a fabulous day out when watching the Guinness Six Nations rugby fixtures in 2023.

With Wales, you can be guaranteed of enjoying a feast of world-class rugby. Will you be visiting the Principality for the Guinness Six Nations?

The Stadio Olimpico, also known as  Olympic Stadium, is Rome’s largest sporting facility and home of Italy rugby union. The venue is located within the Foro Italico sports complex and has a capacity of 70,634.

Stadio Olimpico is primarily used for football and rugby matches and has hosted four European Cup Finals. It also served as the centrepiece stadium for the 1960 Olympic Games, hosting the athletics competitions, and the opening and closing ceremonies.

In December 1950, the site reopened to resume building work. In 1951, site engineer Carlo Roccatelli passed away and the work was entrusted to architect Annibale Vitellozzi, who tried to honour Roccatelli's ambitious plans for the stadium. However, plans to make the structure more complex fell through due to funding and environmental issues. Upon completion, the stadium reached a capacity of 100,000 people and took on the name Stadio dei Centomila until 1960, when it was renamed Stadio Olimpico for the 1960 Olympics.

The first-ever international rugby match at the Stadio Olimpico was held in 1954 and resulted in a 39-12 for France over Italy. It also hosted the 2013 Guinness Six Nations Championship fixture between France and Italy, where the Azzurri beat the Les Bleus for the second time in the series history and the first time at the stadium.

If you are interested in the Six Nations series in 2023, our Six Nations hospitality team are ready to help you make your day memorable - Complete this contact form and one of our Six Nations Team will be in contact shortly.
Scroll to top