Eventmasters are delighted to offer a wide range of VIP & Corporate Hospitality Packages at Villa Park on match day in 2021/2022.

The stadium is one of the oldest in Europe, dating back to 1897. To begin with, Villa Park was actually known as Aston Lower Grounds and resided in Aston Grounds as well as the Jacobean stately home Aston Hall, now just a stone’s throw away from the arena. During this era, it functioned as a Victorian amusement park, even hosting Buffalo Bill’s Wild West Show in 1887 and up until the dawn of the First World War, Villa Park was encompassed by a cycling track.

William McGregor, who joined Aston Villa’s committee in 1877 founded the concept of competitive football and thanks to his vision, Villa, alongside 12 other founding members began League Football.

Villa Park had hoped to extend its capacity to 130,000 but the World War prevented those plans from happening. The stadium now has a capacity of more than 42,785, with its highest ever attendance in 1946 when 76,588 attended a match against Derby County.

Fans can look forward to a matchday experience like no other with Eventmasters VIP Hospitality packages and tickets for the Premier League and other exciting events at Villa Park.

For all the latest news and updates from Villa Park, make sure to follow our Villa Park News page.

Eventmasters are delighted to offer amazing hospitaliy packages at Villa Park. To see all the options we have available, please click the hospitality button below. 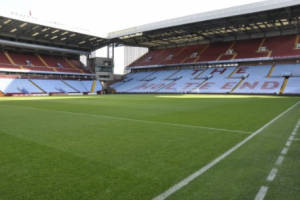 Eventmasters are excited to announce the new Aston Villa Hospitality Package for the 2021/22 Premier League season.

Experience all the action with The Directors Club Package! From excellent seats to the luxurious suite, you really are guaranteed the full VIP experience. Enjoy the ultimate matchday experience at Villa Park, Directors Club and see some of the nations best players!

Aston Villa is one of the founders of League football and despite having ups and downs in the First Division, Villa has cemented a name for themselves in English football. In 2018/19 and under Dean Smith, the Lions set a new club record, winning ten of their League matches in succession – their longest ever winning run in league history.

They have been League Champions 7 times, won 7 FA Cups, 5 League Cups and 1 European Cup. Villa currently rank third place amongst clubs in the UK with the most trophies, behind only Liverpool and Arsenal – so they have much to be proud about.

Follow the latest Villa news and updates here with Eventmasters.

Aston Villa is considered the ninth biggest stadium in the UK and has been home to Aston Villa since 1897, though the stadium itself was founded in 1874. In the year of 1897, Aston Villa won their third First Division League title at their new home.

Villa Park has hosted 16 international fixtures and was the first grounds to stage international football in three different centuries. Villa Park was also the regular venue for the FA Cup and have hosted 55 FA Cup Semi-Final matches.

The stadium itself is unique in design and speaks volumes about its ripe history, with its different shaped stands. The Holte End is double-deckered, the beloved Trinity Road three-tiered and extending out over the road outside, the double-decker Doug Ellis standstill impresses, and then the North Stand, which stands by itself and is often reserved for away fans.

The stadium has hosted Premier League, Cup and Championship games but is more renowned for its beautiful grounds and unique atmosphere.

Villa are one of the only football teams that have played in every single Premier League season! The other six teams are Tottenham Hotspur, Arsenal, Chelsea, Everton Liverpool and Manchester United.

Back in 1930/31, they achieved a record of 128 goals during a season and that achievement still stands the record for the most goals to be scored in a single season! In addition to this, Villa Park has hosted more FA Cup semi-finals than any other football club.

The Holte End Stand is located at the south end of the stadium and consists of two tiers. The two tiers in the stand are slightly curved to ensure that all supporters get the very best view possible of all the matchday action.

The Trinity Road Stand is the newest stand at Villa Park. The stand was completed in 2000 and includes the dressing rooms, club offices and the director’s boxes. This stand is the only stand out of four which includes three-tier seating with an additional row added for executive boxes.

The North Stand, which was formally known as The Witton End, is the oldest stand at Villa Park (completed in 1977). The stand consists of two tiers with an added extra row for executive boxes. Away fans are usually located in the bottom area of The North Stand as it is believed to create a better atmosphere.

The Doug Ellis Stand was formally known as The Witton End Stand. It is a two-tiered stand that includes a row of executive boxes between the tiers. The stand was originally supposed to be constructed the same as The Holte End and The North End stands (with the goalpost roof structure), however, the roof was changed to a cantilever design.

Villa Park has hosted a number of other events, including concerts, athletics, weddings, Christmas parties, conferences and meetings and banquets and dinners. Music stars such as Bruce Springsteen, Barry White, Duran Duran, Take That and Bon Jovi have graced Villa Park.

In 2015, two Rugby World Cup Group Stages took place at Villa Park and the stadium also offers Villa Park tours, on weekdays and weekends. If taking a tour on Sunday, you can treat yourself and your guests to Sunday lunch too.

Such an outstanding venue demands outstanding hospitality services, and Villa Park does more than tick that box. Combining prime location seats with splendid views alongside exquisite dining and VIP service, Villa Park is not a venue to be overlooked.

Secure your hospitality packages and tickets today for all the latest Villa Park events with Eventmasters.

And, for the latest news and updates, see our Villa Park News Page.