Eventmasters are delighted to offer a wide range of VIP & Corporate Hospitality Packages at Emirates Stadium for major sporting events in 2021/2022.

Since 2006, Arsenal has called Emirates Stadium their home. This replaced the previous stadium at Highbury which only had a capacity of 38,419 people. Accomplishing the mission for expansion, Emirates is able to hold 60,260, making it the fourth largest football stadium in England.

Three years after its opening, Arsenal fans requested for the new stadium to undergo a programme of ‘Arsenalisation’.  The Gunners felt as though the stadium needed a further injection of Arsenal aesthetics. In a bid to please the fans, white seats were installed in the pattern of the cannon shown in the club’s crest. A shrine was also erected at the front of the stadium, which included every player to have ever played for Arsenal, entitled ‘The Spirit of Highbury’.

Fans can look forward to a matchday experience like no other with VIP and hospitality tickets for the 2021/2022 Premier League and other exciting events with Eventmasters at Emirates Stadium.

Eventmasters are delighted to offer amazing hospitality packages at Emirates Stadium. For further details, please click the hospitality button below. 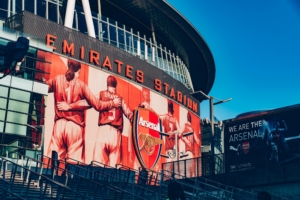 Come and enjoy the 2021/22 Premier League fixtures at the Emirates Stadium with our Official Arsenal VIP Hospitality Packages. You will receive outstanding match day tickets to see Arsenal FC in action, combined with a memorable football hospitality experience with a choice of two of our packages: Club Arsenal Package or The Superbox Package.

Don’t hesitate to purchase your tickets today to watch The Gunners in action!

Witnessing The Gunners at the impressive Emirates Stadium is always a thrilling event. Why not head over to our hospitality page to discover our range of Arsenal hospitality packages.

History of the stadium

The initial home for the club was Arsenal Stadium but, due to its location, was often simply known as Highbury. The stadium opened on 6th September 1913 but, despite two renovations, the club eventually outgrew the venue and headed over to the new Emirates stadium in 2006.  The beloved Highbury was eventually converted into flats and is now known as Highbury Square.

Arsenal actually won the First Divison and the Premier League 13 times and the FA Cup 10 times. Back in the 2003/04 season, The Gunners broke the record for the longest unbeaten run in all of the competitions over a season of 38 games! After this, they were known as ‘The Invincibles’.

They are also the only football club that has gone the longest in the Premier League season without being relegated! The club was last relegated back in WW1 over 90 years ago.

The Emirates Stadium is called a modern ‘bowl’ and this means that each of the stands in the stadium has the same amount of tiers. The four stands in the stadium are called The North Bank, East Stand, The Clock End (Stand) and The West Stand. The stadium was made into a compact ‘bowl’ shape due to the location of the ground. The stadium is located in a residential area which becomes very overcrowded when match days are taking place due to the club’s popularity. The design of the stadium ensures that it can meet capacity demands, Arsenals aim was to build a modern stadium with modern facilities.

The stadium has been used for a number of uses other than sport. In 2008, the stadium played host to a summit between Gordon Brown and Nicolas Sarkozy. Furthermore, the venue has also hosted several concerts, including Bruce Springsteen, Green Day and Coldplay.

X-Factor and Britain’s Got Talent have both held auditions at the stadium. In addition to this, American rock band, ‘The Killers’ are to be performing at the Emirates Stadium as of June 2022.

Emirates Stadium is a fantastic venue for witnessing top quality football and ensuring your guests experience the game in style.