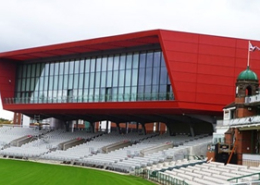 Emirates Old Trafford corporate hospitality packages provide you with the perfect opportunity to entertain your valued clients and guests at world-class cricket in 2022. The Point is one of the most recognisable structures in sport, and the first-class hospitality on offer inside this fantastic facility perfectly compliments the action on the pitch.

In 2021, England played Pakistan and India at Old Trafford for the IT20 and LV Test Matches. Although the 5th England v India match was cancelled without a ball bowled, England showed their talent against Pakistan, coming back to claim a deserved 2-1 victory by three wickets.

In summer 2022, guests and clients can witness England welcoming South Africa for the LV= Insurance Test Series while clashing with India again for the Royal London ODI. Don’t miss your chance to see these fantastic fixtures with our official corporate hospitality packages – offering delicious fine-dining, complimentary drinks and spectacular views from your very own private balcony.

These days Emirates Old Trafford sees itself as an award-winning conference, hospitality and events venue, but it is also home to the great Lancashire County Cricket Club. It is a notable Test venue where unforgettable cricketing moments have been created. Perhaps one of the most iconic moments at Emirates Old Trafford was England retaining the Ashes in 2013.

Emirates Old Trafford includes state of the art facilities,  customisable spaces, marketing to the fore, all part of the finest traditions of modern cricket, making for some fantastic hospitality options.

Founded in 1864 as a successor to Manchester Cricket Club, Lancashire has played at Old Trafford ever since. The club’s limited overs team is called the Lancashire Lightning, a reference to the English Electric Lightning plane manufactured in the county.

Lancashire has produced great players down the ages. Johnny Briggs, whose career lasted from 1879 to 1900, was the first to score 10,000 runs and take 1,000 wickets for Lancashire. Ernest Tyldesley is the club’s leading run-scorer with 34,222 runs in 573 matches spanning 1909 to 1936, a massive contributor to five County Championship wins between 1926 and 1934. Lancashire’s first professional captain was Cyril Washbrook, chosen in 1954.

And heroes produce unforgettable moments of brilliance. As England’s second oldest test venue, Old Trafford is without a doubt one of the most renowned. It was where the first-ever Ashes test was held in England in July 1884. In 1956, it saw the first 10-wicket haul in a single innings by England bowler Jim Laker, who achieved 19 wickets for 90 runs, a record that is unmatched in Test and first-class cricket. And it was in the 1993 Ashes Test at Old Trafford that brilliant Australian leg-spinner Shane Warne bowled Mike Gatting with the so-called Ball of the Century.

On the facilities side, Old Trafford boasts that the venue provides “an inspirational and unique setting for exhibitions, conferences, meetings, dinners, parties and more”, catering for 10 to 1,200.

Large, red and modern, The Point is an eye-catching conference and event complex.

The award-winning Pavilion – alongside The Point – was originally built in 1895 but underwent an intensive £7.5 million redevelopment that was completed in 2013.

With a footbridge linking The Point to the Pavilion, delegates have easy access to breakout rooms and extra syndicate spaces.

Even the AJ Bell Players & Media Centre transposes into a venue for corporate workshops, training, away days, meetings and team-building events, while the Indoor Cricket Centre is not just for batting and bowling but magics into yet more event space.