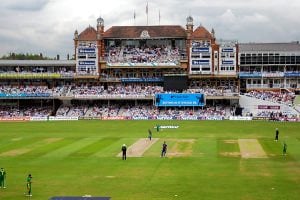 The KIA Oval, is recognised as the home of T20 cricket in Surrey. The KIA Oval traditionally hosts the Ashes Test Series Final. Eventmasters are delighted to offer a variety of hospitality packages for England’s test matches.

Their iconic captain Virat Kohli led India toured England last summer, competing in an action-packed test match that closed their international series. England also clashed with Sri Lanka, who returned to KIA Oval after defeating their hosts 3 years ago for the Cricket World Cup. The Three Lions won by 8 wickets against Sir Lanka, returning more determined than ever after Sri Lanka defeated their host in 2019 for the Cricket World Cup.

Entertain your important clients and guests at the KIA Oval with our superb corporate hospitality packages. Our fantastic range of suites are available to suit your refined tastes and requirements, including the Ashes Suite and Duchy Suite, The Montpelier Club and the luxurious Corinthian Roof Terrance. These delightful corporate hospitality packages are sure to give both you and your esteemed guests a fabulous day to remember.

The Kia Oval in Kennington, south London, is home to Surrey County Cricket Club – formed in 1845 and one of the most historic sports clubs in the UK. It has also staged International cricket there since 1880 and was the ground where the Ashes were born in 1882.

Since then, every good cricketer in the game has played in the shadow of the well-known gas-holders who overlook the ground. Surrey's Club first won the County Championship in 1890 and, in a golden era from 1952 to 1958, took the title an unprecedented seven consecutive times.

Ever since we have been introduced to One Day and Twenty20 cricket, Surrey has also had a lot of success in the limited-overs game.

In the twentieth century, 1938 saw Sir Len Hutton achieve the highest ever recorded Test Match score by an Englishman at The Oval before, ten years on, Sir Donald Bradman, the great Australian and arguably the best cricketer, played his final innings at the ground, just failing to score the four runs he required for a Test Match average of 100.

Later KIA Oval became a home from home for the all-conquering West Indies teams of the 1970s and 1980s, with Michael Holding taking 8/92 in 1976 and Sir Vivian Richards hitting 291 in the exact match.

In more recent times, KIA Oval hosted the finale of the 2005 Ashes – for many the most incredible series ever played – and again staged England Ashes victories in 2009 and 2013.

Away from cricket, some say KIA Oval is where English team sport was founded.

In 1870, KIA Oval hosted the first-ever International football match in England – between England and Scotland – and two years later, in 1872, the first-ever FA Cup Final between Wanderers and Engineers, won 1-0 by the Wanderers. The Engineers gained a measure of revenge in 2012 when the ground re-staged the match, winning 7-1.

The same year, 1872, the Surrey's was the venue for the first-ever Rugby Union fixture to be played in England, between England and Scotland.

The facilities are impressive, with a new 6,300 capacity stand development completing the ground modernisation, replacing the Peter May and Lock Stand, and raising capacity to 25,300.

It has kept the name of Peter May, one of the all-time greatest captains in the history of Surrey CCC and a boyhood hero to a generation of fans, with the neighbouring Laker Stand becoming the Lock/Laker Stand to pay homage to the enduring spin partnership between Jim Laker and Tony Lock that helped May deliver all that success to the Club in the 1950s.

The space beneath has been transformed into a large concourse for the KIA Oval with many new toilets, bars, and corporate-friendly catering facilities designed to improve the customer experience for the hundreds of thousands of supporters that visit every summer. It has become a fabulous corporate venue for those looking to dazzle their esteemed clientele.

A great and historic stadium that is determined on continued greatness into the future.

With the inclusion of the Ashes Suite and Duchy Suite, guests can watch the legendary players of the pitch from a private balcony and enjoy the comforts of well-prepared food and refreshments, providing ultimate cricket hospitality to remember. The JM Finn Stand Executive Boxes and the Montpelier Club offer guests traditional afternoon tea and fine dining with a la carte lunch menu. Don't miss out on our superb range of corporate hospitality facilities for a delightful day during summer 2022.