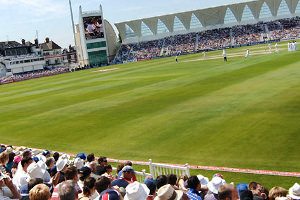 Eventmasters are delighted to offer official Trent Bridge hospitality packages for a selection of exciting international encounters in 2021. Trent Bridge, home of Notts CCC, is always one of the most popular venues and the hospitality on offer in the Boundary’s Edge and Radcliffe Road Suite offer you the chance to see a number of renowned cricket events in VIP style.

With Trent Bridge hospitality, you will not only enjoy a great match day but also an array of splendid corporate benefits including a complimentary bar, fine dining and a champagne reception.

Trent Bridge is one of the UK’s leading cricket venues, located in West Bridgford, Nottinghamshire, England.

Known as the home of Nottinghamshire County Cricket Club, it has become renowned for hosting some of the world’s most exciting England Cricket fixtures including games in the Cricket World Cup along with a series of ODI fixtures.

Trent Bridge is not only the home of Nottinghamshire County Cricket Club – it is also a world famous cricketing stadium and landmark.

The founder, William Clarke, saw the potential of a quaint little meadow at the back of the Trent Bridge Inn – corporate hospitality to the fore even then perhaps – in 1838.

He married the landlady, Mary Chapman, and within a year was hosting matches on a newly created, fenced off ground alongside the pub.

Considered by many players and spectators to be one of the most pleasant in England, the architecture of the ground has been kept within the parameters set by the 1886 pavilion – one of the most renowned trademarks of cricket because it faces the wicket at an angle.

The first international cricket match held at Trent Bridge was a match between England and Australia which ended in a draw.

It had the honour of hosting the first match of the first five-match Test series in England. W.G. Grace, playing his last Test, was 50yrs 320 days old when the match ended; only Wilfred Rhodes played Test cricket at a greater age, and he made his debut in the same game.

Trent Bridge has developed steadily ever since, and has seen many of the cricketing greats leave their mark on history.

Trent Bridge has a capacity of 17,000 people on match days and it usually ends up being sold out for Test and One-day Internationals. It also boasts facilities for both domestic and international visitors.

An array of catering options and bar facilities are on offer throughout the ground, while Nottingham itself has the most wonderful hostelries and restaurants.

Trent Bridge ticket prices can vary a great deal depending on the match of your choice. Booking in advance can ensure that guests make a saving ahead of their chosen game.

Trent Bridge tickets are a cost-efficient way of enjoying some of the UK’s finest cricketing spectacles, however, an occasion such as the Cricket World Cup is certainly worth enjoying with an added tier of VIP luxury.