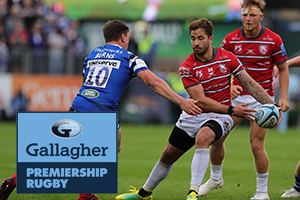 If that wasn’t enough to whet the appetite then experience all that the West Country Derby has to offer at the ‘Home of Rugby’ as Bath Rugby lock horns with local rival Wasps in The Clash in 2021. As two of the Premiership’s fiercest rivals come head to head, be sure to enjoy the fixture in superb style with one of our corporate hospitality packages. With an electric atmosphere and a first-rate personal hospitality service to match, you will certainly impress your valued clientele.

With our Gallagher Premiership Rugby hospitality packages at the ‘Home of Rugby’, Twickenham Stadium, there is no better way to experience domestic English rugby.

Held at Twickenham, the final sees the stadium packed out with 82,000 supporters from every Premiership Rugby team all set on a fun day, plenty of hospitality and a feast of fabulous rugby. Lots of good-natured banter along with plenty of beer to be consumed.

For the two clubs, who have fought their way through, the culmination of a hugely demanding series of challenges which test players and coaches to the limit.

Whoever is crowned the winner has the battle scars to prove it as they lift the trophy high. In recent years Leicester Tigers, Wasps and Saracens have been dominant, but it waxes and wanes with Bath, Exeter, Harlequins and Northampton very strong.

There are twelve clubs in the Premiership. The competition has been played since 1987, and has evolved into the current system employing relegation to and promotion from the RFU Championship.

Following the completion of the regular season, the top four teams enter the play-offs, which are held throughout May. The top two receive home advantage, the league leaders hosting the 4th ranked team, and the 2nd place side taking on 3rd place. The winners of these semi-finals progress to the final. The winner of the final being Premiership Champions.

Initially two teams, Bath and Leicester proved to be head and shoulders above anyone else and between them dominated the top of the table, with Wasps the only other side to be crowned champions in the first ten years.

Leicester were England’s first official champions when they beat Waterloo on the last day of the 87/88 season.

The following year regular fixtures were introduced and Bath started their reign of domination, going on to win six titles in eight years as the men from the Rec took the English game by storm. Wasps interrupted their run in 1990 and Leicester won in 1995 – with Wasps claiming their second title in 1997.

By this stage the concept of professionalism was gaining momentum and the changes spread through the sport rapidly, altering the face of rugby from a game to a business.

The Courage League had been very popular but the league really took off when Allied Dunbar took over the title sponsorship in 1996.

Newcastle was the first of the “professional” clubs as Sir John Hall dug deep into his pockets and made the team, formerly known as Gosforth, into the 1998 champions.

Leicester then flexed their considerable muscle and went on one of the greatest winning streaks ever. From 1999 to 2002 they were almost unstoppable as they claimed four consecutive titles. What was so impressive was their 57 unbeaten home wins that stretched from December 30, 1997, to November 30, 2002 and included 52 successive victories. So great was their superiority that they only lost 14 games out of the 92 played over the four seasons.

By the end of the 1990s the Premiership had become the Zurich Premiership. Wasps were crowned English Champions in 2003, 2004 and 2005 under the expert guidance of director of rugby Warren Gatland.

Guinness took over from Zurich for 2005/6 and were rewarded with a new name on their new trophy as Sale Sharks won their first ever Premiership title. Wasps beat Leicester Tigers the following season as the first ever sell-out crowd saw England legends Lawrence Dallaglio and Martin Johnson make their final appearances.

In June 2010 Aviva took sponsorship of the tournament and was known as Aviva Premiership Rugby, with Northampton Saints, Harlequins and Leicester Tigers setting the pace. During Aviva’s tenure as title sponsor of Premiership rugby Exeter Chiefs completed their fairytale by beating Wasps in the 2018 final. It was Saracens however who have been the dominant force in recent years, winning 4 titles in the past five years.

An era of rapid change which has just got better and better for rugby fans now sees Gallagher take over from Aviva as title sponsors.