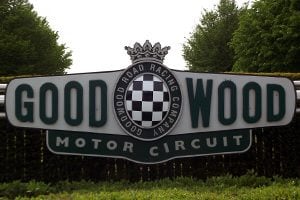 Goodwood hospitality packages are the perfect way to entertain your major stakeholders and important clients in a wonderful setting. The Goodwood Motor Circuit is home to outstanding events, including the famous Goodwood Revival and Festival of Speed. Enjoy great wheel-to-wheel action featuring some of the world’s oldest and most valuable cars; combined with first-class hospitality to provide a superb day.

Experience more than a century of motorsports history with Goodwood hospitality. Champagne and afternoon snacks combined with the vibrant atmosphere provide motorsports fans with a unique opportunity to get closer to the world’s most exclusive cars and drivers, such as Jenson Button, Lando Norris and Valentino Rossi.

The Goodwood Revival is a three-day festival held each September at Goodwood in Sussex for the types of road racing cars and motorcycles that would have competed during the circuit’s heyday from 1948 to 1966.

A magical event, full of colour, panache and revving engines, it offers a chance to step back in time to enjoy the glamour and nostalgia of the 1940s, 50s and 60s, the golden era of motor racing.

The Revival allows visitors the opportunity to leave the “modern world” behind and join motorsport luminaries in an unabashed celebration of flat-out wheel-to-wheel racing around a classic racetrack, untouched by the modern world.

See Grand Prix cars, sports and GT cars, and historic saloon cars and little-seen Formula Juniors. Many of these important historic racing cars are driven by famous names from motorsport past and present.

The first Goodwood Revival took place in 1998, 50 years after the 9th Duke and Duchess of Richmond and Gordon opened the motor racing track driving around the circuit in a Bristol 400, then Britain’s state-of-the-art sporting saloon.

The circuit ranked alongside Silverstone as Britain’s leading racing venue throughout its active years when it hosted contemporary racing of all kinds, including Formula One, the famous Goodwood Nine Hours and the celebrated Tourist Trophy sports car race.

The restored circuit is unchanged from back then, with many visitors determined to get in the mood by wearing appropriate period clothing.

No modern vehicles are allowed within the circuit perimeter except modern race fire and rescue vehicles throughout the weekend.

There are also theatrical sets that bring the past back to life, including many historic aircraft. Even the hospitality facilities have a retro air about them. Experience the Goodwood Mess and Officers’ Club pavilions.

The Goodwood Mess brings an exciting and interactive experience to the Revival, with delicious food and incredible entertainment. Located trackside, next to the assembly area and just beyond the start/finish line with great views to the mighty Madgwick Corner, you are at the centre of all the action.

Overlooking the start/finish line, the Officers Club is set-dressed as an officers’ dining room; guests have access to the paddocks, while viewing is from the trackside garden area. Then again, guests need never move away, watching the racing on plasma screens in air-conditioned luxury.

It regularly features some of the world’s fastest cars, including Formula 1 and Nascar. The famous Hill Climb is one of the four-day event highlights as cars race up the hill, which has an elevation change of 92.7 metres. The Soapbox Challenge and Supercar Run are two other major highlights.

The superb hospitality on offer makes this a truly unmissable event.

Are you beginning to get the buzz?