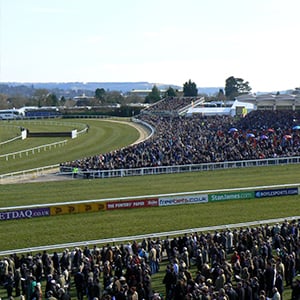 Eventmasters are Official Hospitality Providers (OHS) directly appointed by Cheltenham Racecourse and delighted to provide hospitality packages for the most popular meetings in jump racing including, the fan favourite Cheltenham Festival. The best horses from the UK and Ireland will battle it out on the iconic Cheltenham turf for the sport’s most prestigious accolades including the Boodles Cheltenham Gold Cup.

Experience the Cheltenham Festival in style with our range of corporate facilities including our flagship Silks Restaurant and The Venue. We are also delighted to offer VIP hospitality from within our luxurious Private Grandstand Boxes for all of the major races at Cheltenham Racecourse including The November Meeting, The International Meeting and Hunter Chase Evening.

Cheltenham Racecourse is the home of jump racing and now it has the facilities to match!

Located at Prestbury Park, its most prestigious meeting is the Cheltenham Festival, held in March, which features several Grade I races including the Boodles Gold Cup, Champion Hurdle, Queen Mother Champion Chase and Stayers Hurdle.

Cheltenham Racecourse has a scenic location in a natural amphitheatre just below the escarpment of the Cleeve Hills.

Hundreds of thousands of racing fans come to Cheltenham Racecourse every year, but you don’t need to be an expert to have the time of your life.

The wide variety of experiences ranges from the relaxed feel of the meetings in October and April to the heady excitement of The November Meeting and the family fun of New Year’s Day.

However, the focus of any jumping season is always the Cheltenham Festival.

It is the shining jewel in jump racing’s crown. Four days of magic, magnificence and madness, playing to an audience of 235,000 people, all of whom are determined to have the time of their lives.

And, following a £45 million redevelopment it now has the facilities to back its pre-eminence.

Princess Anne officially opened the new grandstand that is named after her.

The Princess Royal Grandstand was the final part of the scheme which took 19 months to complete. The stand, which replaced the previous 1920s structure, houses restaurants, bars, private boxes, viewing facilities for racegoers and a new royal box.

It was the largest project ever undertaken by the Jockey Club, coming in on time and on budget.

The ground floor consists of a public bar, called the Vestey Bar after Lord Vestey who was chairman of Cheltenham Racecourse for 21 years until 2011, and features a bistro providing hot food.

The first floor of the stand provides a bar for Annual Members plus the Big Buck’s Champagne Bar, named after the horse that won an unprecedented four Stayers Hurdles and 18 consecutive races.

The second floor consists of an Owners & Trainers Bar, with a balcony overlooking the Parade Ring, horsewalk and course, plus the exclusive Cotswolds Club.

The Royal Box and 11 private boxes are on the third floor.

The top floor houses The Cheltenham Club, where members are allocated a table for the season, from which to enjoy a four course, a la carte lunch, stunning views of Cleeve Hill and the Malvern Hills at the back of the stand and even a fireplace to keep warm between races during the winter months, a combination of unrivalled fine dining and a stunning sporting setting.

The opening of the new stand signified the end of a redevelopment which incorporated 14 different projects including a refurbished weighing room, a new first aid room and crescent walkway greatly assisting racegoers’ mobility behind the grandstand and offering additional viewing of the parade ring.

Cheltenham Racecourse hospitality facilities have always been the height of luxury and exclusivity.

No wonder the Cheltenham Festival is so popular with the Irish who cross the water to attend in their thousands.

Estimated gate receipts total around £7 million while around £600 million is wagered on racing during the occasion.

Just fantastic – full of the craic, as the Irish would say, hospitality second to none.