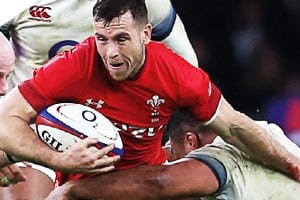 Eventmasters are thrilled to operate as officially registered agents of WRU hospitality. Enjoy world-class entertainment at the home of Welsh rugby with Principality Stadium hospitality packages in 2021/22.

Whether entertaining work colleagues or your important clients and guests, our wide range of VIP corporate hospitality facilities for the Six Nations and Autumn Internationals at this iconic stadium will create an experience to savour.

Principality Stadium, the former Millennium Stadium, is the home of the Welsh national rugby union team.

Initially built for the 1999 Rugby World Cup, it has diversified to include many other large-scale events and also hosts Welsh international football matches. The iconic stadium opened in June that year, with Wales first home fixture being a friendly against South Africa. Wales rose to victory 29-19 against South Africa before a test crowd of 29,000.

The Visit Cardiff visitor and tourism website describes the thrill thus – “Explore the magnificent Principality Stadium, one of the most impressive icons of modern Wales. Discover the 2012 Olympic football dressing room and experience the atmosphere before a match in the Dragon’s Lair, Wales’ rugby team dressing room.

“Hear the roar of 74,500 fans as you walk down the players’ tunnel towards the hallowed turf, and lift the trophy to the skies like a sports star in the President’s Box, an area normally reserved for royalty.”

And that’s just a taste of the action as Wales run out on a big Six Nations occasion.

It sends shivers down your back, sets the hair on end and scares opponents.

The name change came about as a result of a partnership between the Welsh Rugby Union and the Principality Building Society, a 10-year investment commitment in Welsh rugby by the company.

At the official handover in 2016, WRU chairman Gareth Davies pledged it was the start of a new era.

He said: “The current stadium has been in situ for the last 16 years and has hosted more than seven million rugby supporters in 110 matches involving Wales.

“There have been some other significant events such as FA cup finals, rugby league finals, world boxing fights and some fantastic concerts. We are delighted to go into the next era of development.

“This new partnership is a boost for all levels of Welsh rugby, with reinvestment in rugby communities and individuals who dedicate so much of their time, energy and passion to the sport. The partnership is also a key factor in our vision to encourage more people to engage with rugby, more often, providing more enjoyment and success on the field.”

Principality have been in a working partnership with the WRU since 1969.

Graeme Yorston, group chief executive, declared proudly: “We’re very conscious that as a member-owned business we try to give back to our members. The whole of Wales can share in this relationship and partnership.”

Former Welsh coach Warren Gatland noted: “The national stadium is a very special place for everyone involved in Welsh rugby. I’ve said it before, but the stadium is simply the best rugby stadium in the world.

“The partnership with Principality Building Society will benefit the whole game from grassroots right through to the elite.”

The Stadium actively generates more than £130 million for the local economy each year.

It is a must experience for every rugby fan wherever they are from and whoever they support. Secure your Six Nations and Autumn International tickets and hospitality today.